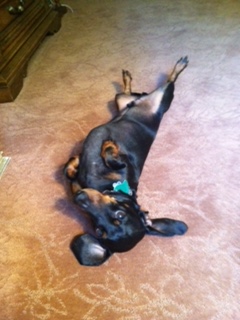 Oscar, my black lab, looks a little different from most black labs. His legs are shorter, his fur is shorter, and his head is smaller – not to mention his entire body. But he’s a black lab because, where we have recently moved, everybody has a big dog, and many are black labs. So, he needs to be a black lab.

When we hike a trail with his new best friend, Delmar (who looks a lot closer to a black lab than Oscar), Oscar invests himself in the walk almost completely. He wants to keep up with Delmar. His short legs churn at blazing speed (OK, maybe not blazing, but faster than normal), constantly trying to catch up to Delmar. This attempt at speed is in dramatic contrast with a normal Oscar walk which is more of a saunter, a meandering, a sashaying, guided by his nose, and at a pace resembling that of the occasional slug he confronts on our garden path.

Oscar’s metamorphosis when walking with Delmar is not unlike some small businesses. When they get around larger businesses, they develop more of a spring in their step. Large customers, large suppliers, large potential investors, and large member companies in their peer advisory group can cause the business to step it up a notch.

As a result of hanging out with Delmar, Oscar is healthier and his self esteem is elevated. He’ll probably live longer because of his new friend. He dares to try new things (like actually getting close to the creek that runs along one of his favorite hiking trails).

If there’s a downside, it’s the potential for injury as he tries to keep up with the big dogs. He could experience a heart attack, or he could develop the confidence to leap into a fast moving stream that whisks him away prematurely to doggie heaven.

Business lessons? Acquiring large customers or large suppliers or large investors, or joining a business owner peer advisory group with some larger members can be helpful to your business growth, if you’re willing to run faster to make up for your shorter legs. While it’s OK to tell fellow business owners that you are running a $10 million business, even if the best year you’ve ever had was $7.8 million, do not let that bravado lead you into overburdening the business with debt, or seriously overcommitting to large customers.

One of your challenges as CEO is to balance your view of your business against reality. Dreaming of a bigger business can be the beginning of a true metamorphosis. Driving the business considerably faster than its current capabilities allow can lead to a bad ending. The best CEO is a balanced driver.