Want What You Have 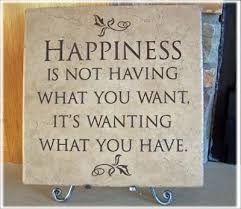 Having spent over four decades in the world of business, I find it particularly interesting to observe general philosophical truths playing out in that world of commerce.

I recently bought a copy of a book based simply on its title: I Love Capitalism!  I was not familiar with the story of Ken Langone, the author, and I was ripe for a stout defense of capitalism, in an era where I seldom here much praise for our democratic capitalistic system.

While I enjoyed the stories Ken laid down during the first half of the book, I was concerned this might simply be another “let me tell you how smart and wealthy I am” autobiography. But I kept reading and, although Ken is neither shy nor particularly humble, his stories eventually drove home some valuable life lessons.

One such lesson concerned a large U.S. company where Ken was a board member, and a horse race at that company among three top executives seeking to become the next CEO. Ken decided to recruit one of the “losers” in that horse race to take the reins of a company whose startup financing Ken had arranged years earlier and where he still sat on the board. Ken’s company, by the way, was producing revenues of $90 billion at the time, so this was a big job for whomever he recruited as CEO. He eventually brought one of the “losers” on as CEO and Ken’s company performed well financially for the next several years.

The “loser” was very well compensated in the form of both stock options and annual salary. At a time when the Enron and Worldcom scandals were making headlines and the media was shining bright lights on all boardrooms with regard to excessive executive compensation, Ken and the board started looking at creative ways to improve the appearance to the outside world of that generous compensation package. When they attempted to discuss some of those variations with the “loser”, he would have none of it. Ken eventually tumbled to the fact that the “loser” had never gotten over losing. In spite of his hard work and accomplishments at Ken’s company, he could not get past having lost the CEO race at his prior company. In the words of Ken, “He lived in a permanent state of feeling ripped off. Just like a guy who can’t get over being dumped by a girl…” Probably no pay package would have been generous enough for him to put that past behind him.

I can think of a couple times in my career when I didn’t really want what I had. How about you? Consider the following possibilities.

Maybe, in spite of having great operating people, you decide it’s time to recruit a high powered Chief Operations Officer, and you find the perfect candidate, and you think you have sold that candidate on joining your organization only to be turned down at the eleventh hour. Then you lick your wounds, bemoaning the fact that you’ll never find another perfect candidate, and you totally ignore the long-term, high-performing, loyal operations staff who have helped you build the company.

Or maybe you invest hours and hours pitching a huge potential customer, only to lose to a competitor, and now you’re burning hours in recriminations of what you could have done differently – all this while your present loyal customers are suffering from lack of your attention.

Or maybe you sell your company for enough money that you no longer have to work and you can spend your time and money doing almost anything you want, but, looking in the rearview mirror, you find yourself pining away because you think you should have held out for a higher price.

Can we agree that none of these scenarios is healthy…or even rational?

Strive to want what you have. Attitude is everything.